The following video features the perspective of demonstrators against the arrest and threatened deportation of the Musa siblings on 6 September in Geneva, Switzerland. The following day, the siblings were deported to Zagreb under the Dublin Regulation.


This week marks the one year anniversary of the closure of the Serbian-Hungarian border. Since then, strict border controls and closures have been implemented across the European continent, including – amongst others – the Greek-Macedonian border, the Italo-Autrian border, the Italian-French border and the Italian-Swiss border at Chiasso. The Dublin Regulation also continues to be applied in a number of European countries, in cases such as described in the videos above regarding the Musa family.

According to the IOM’s « Missing Migrants Project », 3207 people have disappeared in the Mediterranean since the beginning of 2016, making the Mediterranean Sea the deadliest crossing for migrants, with a total of 4333 recorded deaths worldwide. This year in on track to become deadlier than 2015, during which 3673 deaths were recorded. In the Aegean alone, 386 people have vanished, most of whom were fleeing war and instability in Syria, Afghanistan, and Iraq.

By blocking the passage of people fleeing war, potential aslyum-seekers are prevented from claiming their rights, and are instead stuck on Europe’s borders where a concentration of populations are met with drastically inadequate services.

Hate crimes and racially or religiously motivated violence have simultaneously increased in a number of European countries. Hate directed towards refugees and migrants, as well as islamophobia, is becoming more explicitly acceptable, a phenomenon encouraged and reinforced by the tactics and strategies of Daesh and those claim to act on its behalf.

Another year gone, another year we are failing to uphold our political, moral, and legal obligations. Those who are arriving on our borders are fleeing war and insecurity that we had a hand in creating. They are not here for fun. They are young and old, mothers and fathers, uncles, sisters, daughters and sons. Their life plans have been turned upside down, their studies paused. They are engineers, cooks, doctors, gardeners, each of whom has something to contribute to this world.

Yet, many are finding themselves sleeping in the streets of Paris, in the volunteer-run squats of Athens, or in tents on our borders. Another winter is soon upon us. Let not another year mark another 4000 deaths at sea, or from exposure to cold, or from beatings by police as we’ve heard reported from the Bulgarian mountains. Let not another year mark the separation of families as some are left behind, others are lost along the way, and yet more are torn apart by the Dublin Regulation.

Read, listen, and speak. If you are searching for resources to better understand what is happening, a number of organisations are providing regular updates from the ground, as well as statistics. Some examples include :


For more information about the closure of the Serbian-Hungarian border, you can read our article covering the events of the week here: www.gauge-mag.com/analysis/busses-to-somewhere 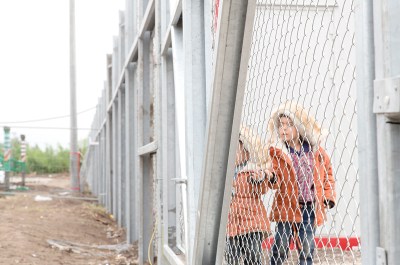 Busses to somewhere: The closure of the Hungarian border